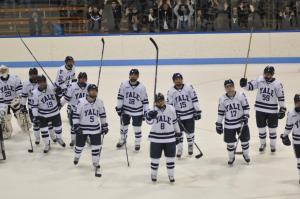 For pre-game snacks and libations, we’ll gather at TGIFridays.

Get tickets for Yale fans at the bargain price of $10. Make your reservations as soon as possible, because this game will probably sell out.

Pick up your tickets from Marshall Hamilton during pre-game festivities or alert him (610-566-1675, mhamil2741@aol.com) if you want your tickets at the rink’s Will Call window.

Reservations need to be made by February 10th. Make your reservations HERE.