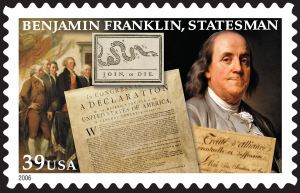 Yale’s collection of papers and materials by and about Franklin is the most extensive in the world. It was assembled during the first decades of the twentieth century and received by Yale in 1935. It was hailed as the largest and most valuable gift ever made to Sterling Library.

Where: BF’s Life & Legacy Museum (not to be confused with the Franklin Institute) is located in the Franklin Courtyard, between Market and Chestnut Streets, between 3rd and 4th Streets.

Who: Ellen Cohn, Editor of Yale’s Collection of Franklin Papers will give a presentation entitled “Franklin the Strategic Marketer: Creating an Image for the New United States.” This is something being traced in the most current work, and that is not yet generally known: how Franklin, during his diplomatic mission to France, waged a multi-faceted campaign to create an image for the nascent United States. He created a stunning image of Liberty that was entirely without precedent, published books promoting democratic ideals (and in so doing, had to navigate around the French censors), and, once the peace treaty had been signed, began writing what are considered to be subversive essays against hereditary nobility — under the noses of the French. The most pointed of these essays was never published during his lifetime: it is the famous “turkey” letter that people talk about every Thanksgiving — which, has been discovered, was not a letter to his daughter at all, but rather, a hoax that was written to be “leaked” to the French press. This letter will be published in the next volume of The Papers of Benjamin Franklin, due to be published by Yale in July.

The revamped museum recently opened after a multi-million dollar renovation over two years. It features personal artifacts and interactive displays, showing the Renaissance man’s roles as printer, scientist, diplomat and founder of civic institutions. The displays also show different aspects of his character traits as he was known to be charming, witty, strategic, rebellious and curious. Test your knowledge of American history in state-of-the-art electronic exhibits.

At 5:00PM our group will adjourn next-door for refreshments at either Fork or Buddakan. The group will decide by a democratic show of hands where guests want to go! Make your reservations here or send your payment to:

Admission to museum and lecture:

Yalies or their guests: $15 per person

Get your tickets HERE!