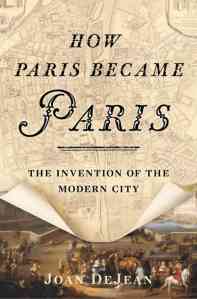 Reception and Lecture by

Joan DeJean, Trustee Professor at the University of Pennsylvania,

The Invention of the Modern City

Though most people associate the signature characteristics of Paris with the public works of the nineteenth century, Joan DeJean will demonstrate that the Parisian model for urban space was in fact invented two centuries earlier, when the first complete design for the French capital was drawn up and implemented. A century of planned development made Paris both beautiful and exciting. It gave people reasons to be out in public as never before and nowhere else. And it gave Paris its modern identity as a place that people dreamed of seeing. By 1700, Paris had become the capital that would revolutionize our conception of the city and of urban life.

Professor DeJean is a 1974 PhD in French from Yale University and the author of ten books on French literature, history and material culture. A charismatic lecturer and knowledgeable narrator, she will take you back four hundred years on a journey that will dazzle you and enable her to make her case with the help of many illustrations from artists of the classical period.

Beverages     Cash Bar for all beverages

All other Yale graduates or their guests…$28 per person

One thought on “Past Event: Annual Meeting, May 7”